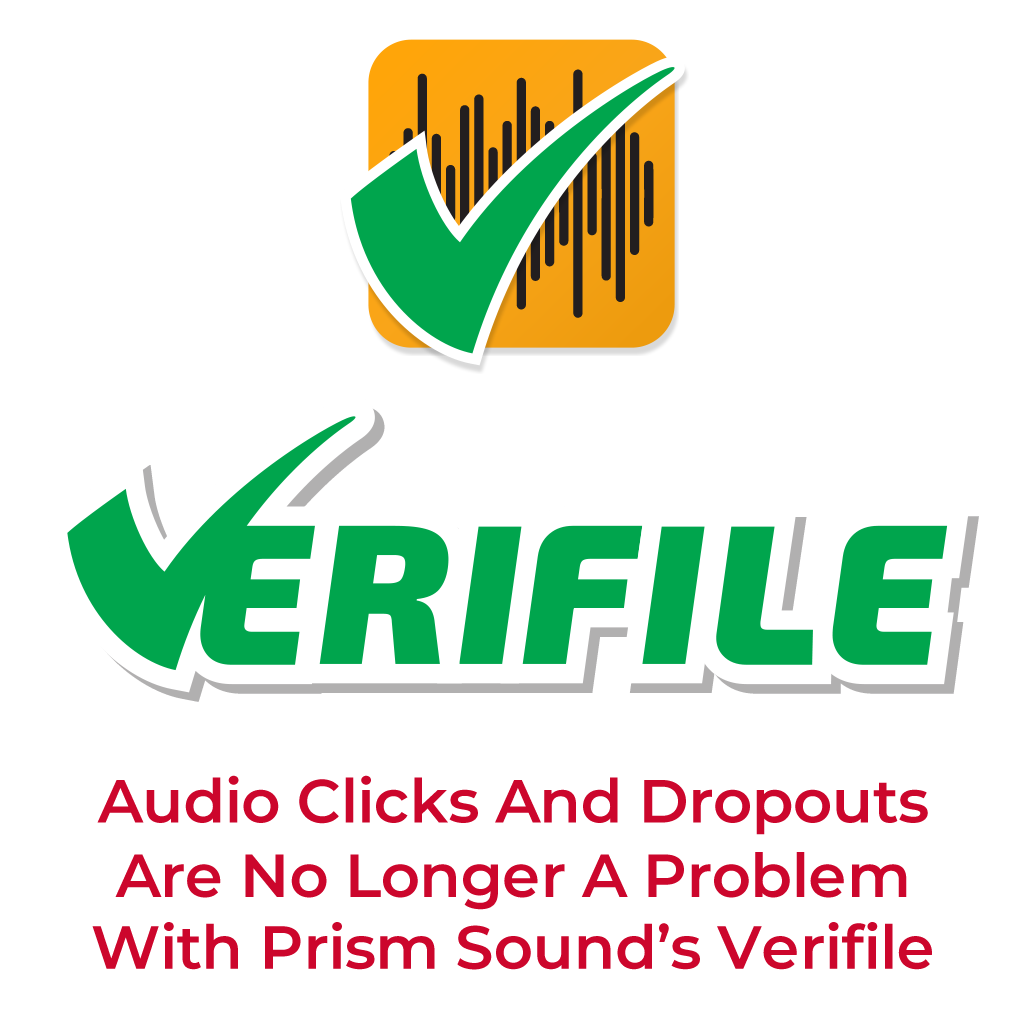 Verifile is a new technology from Prism Sound which allows audio streams and recorded files to be reliably checked for any sort of data corruption.

Ever since the adoption of computer recording of audio, issues of reliability have arisen to the consternation of users who had been used to the reliability of dedicated audio recorders.

The problem is that office computers, whilst ubiquitous and cheap, are designed to perform a wide range of simultaneous tasks of which audio recording is but one. Even if the user would like audio recording to be given top priority, the computer’s operating system is not designed that way, and (even if optimally configured, which they seldom are) it will, now and again, interrupt audio recording to do something which seems more important at the time. This is especially true when dealing with many channels of high resolution audio, perhaps with low latency, which needs a continuous high data throughput. The result is usually a recorded ‘dropout’ of some kind: anyone who has recorded audio on a computer is familiar with the manifestations: these include repeated or missed samples or entire sections, random clicks, pops – even channel swapping. Such interruptions are annoying enough when replaying media streams (everyone is familiar with ‘buffering’ dropouts during internet streaming) but if they happen during recording of, say, an important studio session or an archival operation, the consequences can be catastrophic and costly.

Verifile can reliably detect these mishaps, both in live streams and recorded files. A Verifile check can tell whether the sequence of audio samples have come verbatim from the source, or whether they have been corrupted en route – even if only a single (and perhaps inaudible) bit is wrong in an entire recording. A Verifile-enabled interface produces encoded sample sequences from its ADCs which can be reliably recognised thereafter. The Verifile check may run in real time on monitoring outputs, or it may be an off-line application which can be used to check the file after it has been recorded, or it could run in a VST plugin, or even in the background of an ingestion system checking multiple files as they are recorded.

The Verifile process is entirely invisible and inaudible to the user, so using it is simplicity itself. There is no reliance on accompanying metadata or file hashes – each audio channel is self-verifying. Verifile recordings can be played back through any normal audio paths and devices, or mixed or processed within DAW software, without the need to decode them first. The Verifile process works for any linear PCM audio at any sample rate or wordlength. Files may contain any number of channels – the verification data for each channel is inaudibly embedded within it.

Verifile can also embed additional metadata into the audio stream, such as source and copyright details, timestamps etc.

How does Verifile work?

Verifile is a ‘fragile steganographic’ process which embeds derivative data within the dither of the ADC, containing a rolling hash code which allows the audio data to be thoroughly and continuously checked. The metadata is buried at a level which produces no discernible increase in noise, and is processed before insertion so as to eliminate any correlated content and so produces no distortion or other spuriae. Unlike conventional audio watermarking technology, Verifile is not designed to survive any audio processing or encoding process – only completely pristine and unmodified streams or recordings from a Verifile-enabled source will pass the Verifile check, giving ultimate operator-confidence.

The Verifile process was invented by Prism Sound in 2014, and has been confidentially tested by many of the world’s leading broadcast, recording, mastering and archival organisations since then. Following successful completion of these tests, Verifile was first made commercially available in a firmware release for Prism Sound’s Atlas, Titan and Lyra interfaces in 2018. In these interfaces, Verifile encoding is applied to all of the unit’s ADCs, and can be checked at all of the unit’s DAW outputs. In addition, an offline Verifile Checker app is supplied, for both Mac and Windows, which can check the integrity of recorded files in a variety of formats.

Verifile is not applied to the units’ digital inputs, since to do so might compromise non-PCM use of the interface, and we are reluctant to affect the bit-transparency of the digital input in general. Besides, the problem we are trying to address is concerned largely with computer recording from analogue, since digitised audio may be corrupt already or, if not, may be transferred via a reliable non-real-time data transfer method. However, it would be possible in principle to apply Verifile to a digital channel.

At present, no additional metadata is embeddable in the Verifile implementation of these interfaces.

How do I use Verifile?

Simply record the 24-bit ADC inputs to your DAW in the usual way. When you have made the recording, open the recorded file in the Verifile Checker app (you can open this from the Control Panel by pressing the green button with the Verifile logo in the top right of the Unit Settings area). Choose the audio file (or files) to be checked, and click the ‘Verify’ button. You will see a log of any corruptions in the Verifile Checker app panel, and this log will also be written to a file.

You can also check an E-E or playback stream in real time by routing it to any of the interface’s outputs – Verifile errors can then be checked on the front panel Overkiller indicators in output metering mode, or under each bargraph in the Outputs tab of the Control Panel app. The front panel Overkiller indicators are off if there is no Verifile encoding or no errors, whereas the Control Panel indicators show red for errors, green for no errors or grey for no Verifile encoding.

If you cannot successfully run the Verifile Checker app on a recorded file, check that Verifile encoding is enabled in the Unit Settings of the Control Panel app, and that the DAW software you are using is able (and appropriately set) to pass 24-bit audio transparently.