Prism Sound’s critically acclaimed Lyra audio interface has been given an aesthetic overhaul to bring it in line with its larger multitrack audio interface siblings, Titan and Atlas.

Lyra now boasts the same sleek black-fronted look that was introduced to Titan and Atlas in 2019. It also features Prism Sound’s new updated logo and can now be controlled using the company’s recently updated software app that is available for both Mac and Windows platforms. This enables musicians, composers and producers to manipulate the unit from their own computer, thus speeding up workflow.

“We have created a distinctive brand image for our flagship audio interfaces, so bringing Lyra into the fold was a natural next step,” says Mark Evans, Prism Sound’s Sales Director. “Lyra is already very cool because it gives recording professionals easy access to Prism Sound’s high quality audio conversion at a very cost effective price. The new look makes it even more desirable, while having the ability to control Lyra via our software app makes the unit much simpler to operate. The app provides a clearer, more user-friendly presentation in a re-sizeable window, making it easy to read on the latest 4K screens as well as on older computers.”

Based on Prism Sounds award-winning Orpheus interface, Lyra allows music recording professionals to access the power and sophistication of the Orpheus audio path and clock circuitry, but in a smaller package and at a much improved price point.

Customers who have recently added a Lyra to their recording set ups include Dance music producers Nu:Tone, Hugh Hardie and Etherwood, composer Iain Archer and musician and producer Tim Gennert. 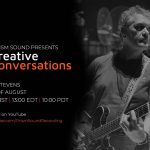